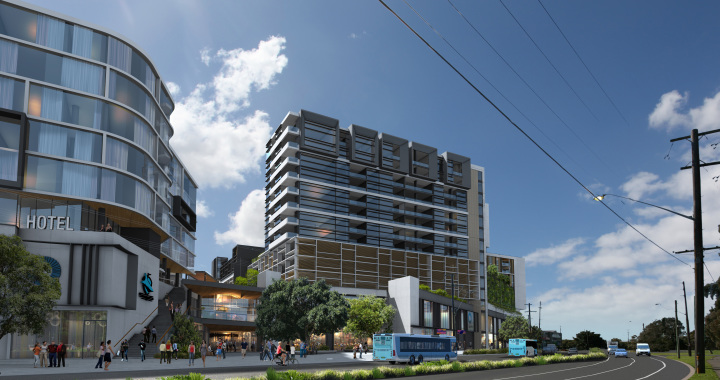 In addition to success on the footy field, 2012 promises to see the Sharks scoring some major wins off the paddock as well.

“The proposed Sharks development is the cornerstone of an exciting vision for our Club and has the potential to enhance and contribute to the community we all love. By providing new facilities, services and jobs to the local area, the Sharks will crystallise its role as an iconic leader within that community.” said Sharks Chairman, Damian Irvine.

“I am convinced that we have chosen the very best joint venture partners possible in the consortium of Bluestone Property Group, Parkview and Capital Corporation. They have the combined skill, experience and determination to see this exciting plan through to realisation,” said Irvine.

Ben Fairfax, Managing Director of consortium partner, Bluestone Property Group is excited about what this proposal brings to the Sutherland Shire, “As a gateway to the northern end of Cronulla, the proposed Sharks Development is an opportunity to deliver a fantastic development outcome for the area.”

For the first time, a one-stop-shop local retail centre will include a range of shopping opportunities including a supermarket, bulk liquor store, food outlets and speciality retail.

Catering for everything from a last minute item to a full weekly shop, the retail centre will be conveniently linked to the existing club and will incorporate a stylish food court with views to Botany Bay and the city making it a ‘must go’ attraction in the Shire.

The new residential development will provide 700 new dwellings in a range of size and affordability. Architecturally designed for people at all stages of their life, the proposal has an emphasis on useable public open space and practical living areas set in a beautiful and convenient foreshore location.

Matt Crews from joint venture partner Parkview said, “Australia’s premier urban planners and architects competed to be part of the team to create the vision for this project. After a rigorous selection process the reins for the creation of this new estate were handed to Scott Carver Architects and Turner Associates Architects. Along with JBA Planning, they have designed a master-planned estate that will enable high quality urban design and architecture to be established in this wonderful location.”

Up to 1600 much-needed new jobs will be created by the development during both construction and operations and will provide local jobs and opportunities to local people.

“Based on average annual earnings wages, this represents an additional $17.2 million in salary and wages for the local region.  Construction of the proposed retail centre at the Cronulla Sharks Leagues Club is expected to create more than 500 jobs, both directly and with suppliers. In total, 1,659 employment opportunities would be created as a result of the proposed retail centre development at the Cronulla Sutherland Leagues Club,” said Crews.

Generous open space areas and parkland will see the newest, world-class multi-abled playground built and will include shade, seating and other amenities such as paths, cycleways and generous public parklands available to all.

Steve Grant, Chairman of consortium partner Capital Corp served as the Chairman of the Western Sydney Institute of TAFE Advisory Board for a number of years, and is keen to use this expertise to involve TAFE and the local High Schools to make use of the Club’s facilities for training in Hospitality.

“We have approached industry stalwarts to lead the interface between the educational facilities and the development team, and we are keen to incorporate a state-of-the-art training facility in the revamped Club,” said Mr Grant.

The Sharks are an icon of the Sutherland Shire and are cheered on by some of the most passionate supporters in sport. A modern and revitalised “Sharkies” will become the next new social and community hub for the Shire providing a central family entertainment, dining and leisure complex for the whole community.

Ben Fairfax said, “Sport plays a major role in the fabric of the Sutherland Shire and with a successful development that incorporates sport, health, education and nutrition there is the opportunity to tie in programmes and unite all sporting codes in the Shire.”

With a secure financial base the Sharks will take on a bigger role, both financially and non-financially in the community. A new centre with modernised facilities will mean the Sharks will continue its tradition of nurturing and fostering sporting talent and excellence for the whole region in all sports and at all levels.

Sharks Chairman Irvine is thankful that the region has been quick to get behind the proposal, “I am hugely appreciative and greatly encouraged by the overwhelming level of support and input we have received for this proposal by the community. Providing an outcome that embraces mutual benefit to the Club and the community is what we’re committed to achieve.”

The proposal is being assessed under the NSW Department of Planning and Infrastructure 3A Approval Process and is due for determination towards the middle of this year. A model of the development is on display in the foyer of the Sharks Leagues Club and more information can be found at www.infoonsharks.com.au

Consumer health-care giant Kimberly-Clark commissioned me to write a series of SEO-optimised articles about conception, pregnancy, birth, and parenting for their Huggies parenting website.

I’m a mum of four and was delighted to write parenting articles for Huggies, who have put together a parenting website that tops most competitors in this hotly-contested space.

Despite the masses of information available to parents these days, there’s still new health research and new ways of tackling old problems that keeps this area a topical one with a large audience of keen readers.

I’ve been a freelance feature writer for Practical Parenting magazine for about five years now and have also written about parenting for The Age, the Sydney Morning Herald, the ABC and a wide range of magazines, and I’m always finding new angles and interesting relevant information – I never tire of this topic!

Dozens of articles were written for the site in 2008 and 2009 on topics selected by the Huggies brand manager based on extensive research by the company.

Copywriting through a Commercial Writing Agency

From time to time, I get commissioned by copywriting agencies, such as Australian commercial writing agency Corpwrite, to help them meet client briefs.

Between March and May 2009, I delivered an extensively-researched white paper for a large Australian information technology firm on behalf of Corpwrite. Thanks to my work with the whitepaper, about Cloud Computing, I was profiled in the Corpwrite newsletter and I’m pleased to continue delivering commercial IT copywriting for them, when there’s a need.